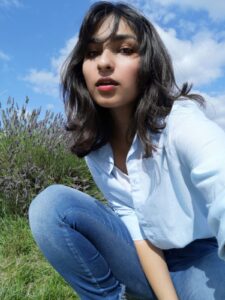 Aulinx, alias of Maya Jay, is a genre-bending music producer and artist from London, UK. Representing a life without limitations, Aulinx refuses to be confined to a style and is known for her rough and raw approach to music. Using her acting and literary background to create a narrative in her tracks, she’s attracted filmmakers and theatre directors alike for her music, with a number of accreditations since her start in 2016. Now recently attracting Realma, she has gone on to produce her debut track “A Hint of Pink”. She’s honoured to be one of Realma’s producers and cannot wait to help reveal the Realmaverse.